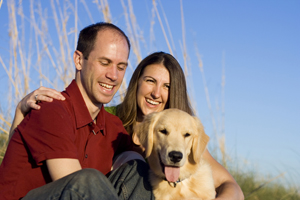 Not usually one to recommend suppliers but DogMaster Trainers was exceptionally helpful , knowledgable and proactive in dealing with our request. Fantastic service and kept his word on delivery our product exceeding our expectation. Leroy our bullmastiff loves his new door. I absolutely recommend Master Dog Trainers!!!
Nicholas Delaveris, SYD - Petway Large Pet door

Just purchased a battery operated no bark collar. Its remarkable the difference. She only barked twice and the collar has worked. No more barking. More humane than what we had, that is putting her on a chain and then muzzle. We live near a walkway and now she runs, or looks at passers by but no bark. She used to bark for an hour on end. Great tool. No she always of chain and more settled in behaviour and happier. Thanks.
Jason Daniluck - DMT Advance Bark Control Collars

We have a male Kelpie puppy 7 months old. He is very intelligent and easily trainable inside the house or within the confines of our yard, or when on a lead. However, when running free in the park with so many scents, people, kids, other dogs, and so many other distractions, there was no way  he would “come” when called if there was something more interesting to do. This was a great worry to us with regard to his own safety, given there were roads nearby and other potential dangers. We purchased one of your Num'axes 250 Dog Training Collars, and after following the instructions for a few days in which you do not activate the collar, we took him down by the river and let him go. He immediately picked up an interesting scent and was off. We called him; then beeped him with the sound signal; then gave him a correction. He stopped and looked at us. We called his name and said “come”, and he did. We made a fuss of him and gave him a treat … and again, he was trained! There have been a few times since, when distractions were maximal, when we have used a "short reminder", but other than that, every time we call him he comes. We are thrilled. We and our three dogs can go for a nice family walk now, keeping relatively close together, safe in the knowledge that Wee Jock will come when called. Happiness is being able to enjoy your pets and for them to enjoy being with their masters and mistresses. Thank you.
James Elliott - Num'axes 250 Remote Dog Training Collar

I have a large number of border collies that over the years have frustrated me with their nuisance barking. One of my collies loves to bark at almost anything. At times his barking would set off some of the other dogs and the worst part was it was mostly of a nighttime, so I bought a Dogtra YS300 bark control collar. I couldn't believe how quickly and effectively it controlled his barking problem, so I used it on the other barkers and it worked a treat. A few years and a number of bark control collars later, my dogs still bark every now and then but constant nuisance dog barking isn't a problem anymore.
J.Hamilton, QLD - Dogtra YS300 Bark Control Collars

Unit is compact, lightweight and easy to use. Good in thick scrub and picks up dogs in gullies no problems.
D. Ellefsen, Collie WA - Garmin Astro 430 GPS Dog System with 3 Collars

This dog trainer is great for young & old dogs. It's really easy to use and it has plenty of range. My dog was driving me mad with his disobedience in the field, now I am back in command & can control my dogs behaviour from greater distances. I can discourage him really quickly and teach him whats acceptable and whats not. It's a great tool, now I always get my dogs attention when I need to. I wish I had one years ago!
Z.Hutley, Richmond QLD - Garmin Delta XC Dog Training Collar

I would like to say "Thank you very much for your fast service". I received my order on the next day that I have ordered it and it has done wonders on my boy Macca. He has almost stopped barking at the dog next door when he is in the backyard playing. But he still gets his job done by protecting the house from strangers when they come to the door. I think he is learning his boundaries again. Thanks for your fast service. Sherryn - Garmin BarkLimiter Bark Control Collar

RE: Service Dept - I received the PAC replacement transmitter today. It's hooked up, has the dog collar in place and seems to be charging i.e. the green light is flashing... I appreciate your friendly advice and co-operation over the past few months in sorting out the problems we've had. The good news is that our 3 year old labrador has responded well to the training and seems to respect her new boundaries (at last).

Thanks again to all at DogMaster Trainers, Jennifer, VIC - PAC Invisible Dog Fence